Ping pong is a racket game/sport in which players hit a small ball back and forth over a net with paddles to try to score points.

In a lot of ways, ping pong mimics regular tennis (the kind played on a court), which is how it gets its formal name, table tennis.

The point of ping pong is to return your opponent’s shots, while trying to prevent your opponent from returning your shots.

This is how you score points and win the game.

Contents show
Ping Pong Gameplay
Ping Pong Singles Rules
Ping Pong Serving Rules
Other serving rules:
Ping Pong Returning Rules
General Rules of Table Tennis
Ping Pong Rules FAQs
What is a let in table tennis?
What happens if the ball hits your body in ping pong?
Who gets to go first in ping pong?
Getting Your Ping Pong On

As you can see, gameplay in ping pong is incredibly straightforward.

It’s really the rules that matter.

The rules of table tennis are divided into three basic categories: serving, returning, and general.

(Note: These are singles, or one-on-one, ping pong rules.

When serving in ping pong, the following rules apply:

When you are returning the ball in ping pong (whether from a serve or from your opponent’s strike), the following rules apply:

Other general rules of ping pong include:

Any agreed upon rules are fine for casual ping pong.

As long as all players agree, you can alter rules to make the game easier or more fun.

Many people, for example, find a proper serve in ping pong difficult (especially for beginners), so you may alter the rule about tossing the ball six inches into the air and allow players to serve straight out of their hand or by bouncing the ball off the table first.

It doesn’t matter what rules you change in casual ping pong, as long as all players are happy and in agreement.

While we’ve tried to cover everything we think you’ll need to know to start playing ping pong, there are a lot of potential questions that might arise during play.

These Q&As should cover any potential disputes that might arise.

What is a let in table tennis?

A let in table tennis is when the ball hits the net during a serve, but continues over it to the opponent’s side of the table.

When this happens, it is considered a mis-hit and must be served again.

It is called a let, because no points are awarded. The point is simply played again.

When the ball hits the net and falls to the opponent’s side of the table during a rally (while hitting the ball back and forth), this is not considered a let.

It is a fair ball and the opponent must return it or the person who struck the ball gets a point.

To be a true let, the ball must hit the net AND touch the opponent’s side of the table.

What happens if the ball hits your body in ping pong?

It depends on when and where the ball hits your body.

If the ball hits your paddle hand or fingers while striking, but returns properly (hits your opponent’s side of the table), it’s a fair hit and gameplay continues.

If the ball hits anywhere other than your paddle hand while striking (like your forearm), it’s a foul and your opponent gets a point.

If the ball fails to touch your side of the table, though, if your opponent sends it sailing over the edge without touching the table and it hits you (or your paddle), it’s a miss for your opponent and you get the point.

Who gets to go first in ping pong?

In official competition, ping pong matches begin with a coin-toss.

The player who wins the coin-toss chooses whether they will serve or receive first OR which side of the table they prefer to play on.

Getting Your Ping Pong On

Ping pong can get wild at times, and anything might happen.

Ball getting stuck in the chandelier, anyone?

But this guide should cover the vast majority of instances that might arise during a game.

Armed with the rules, you can play ping pong anywhere you might happen upon a table.

It doesn’t mean you’ll be any good at it, but at least you’ll be playing fair. 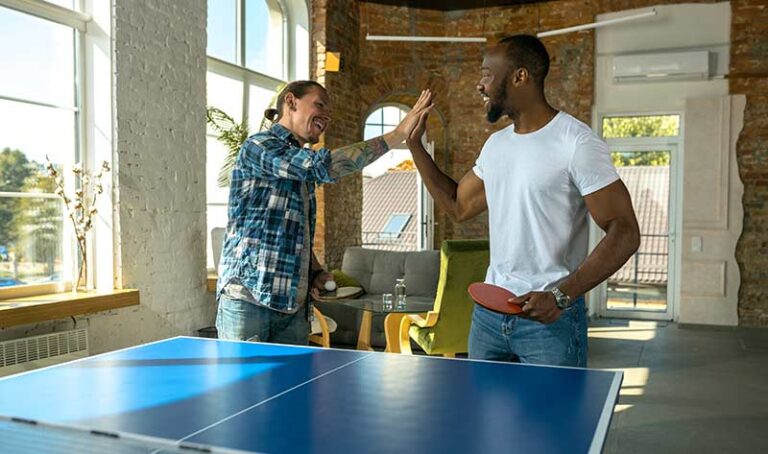 Keeping score in table tennis, or ping pong, is a relatively straightforward matter. Unlike its courtly counterpart, table tennis doesn’t use the “love, 15, 30, 40, game point” system. Instead, it uses good ole natural numbers in their proper order – 1, 2, 3, 4, etc. Since the counting system in ping pong is basic,…