Animation powerhouse Bob’s Burgers does up its holiday episodes, and Halloween is no exception.

From Gene dressing as Turner AND Hooch to Tina being haunted by a fetal pig, Bob’s Burgers Halloween episodes are a celebration of the holiday from the silly to the macabre.

Here’s our very scary countdown of Bob’s Burgers Halloween episodes from the most generic to the hauntedest of them all. 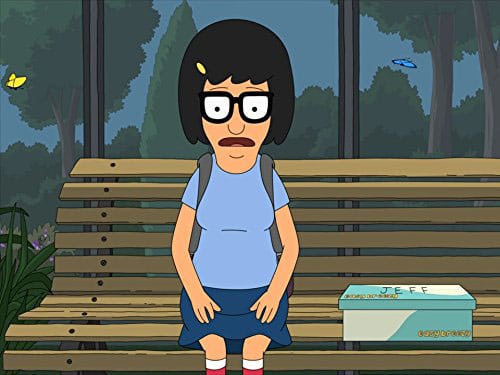 The Synopsis:  When an exterminator thinks the Belcher’s basement is haunted, paranormal investigators come to the restaurant to eat for free… er, investigate.

Meanwhile, Tina dates the ghost the Belchers trapped in a shoebox. ‘Cause, of course, she does.

The Verdict: This episode is very satisfying. Tina huffs a butterfly. Tammy Tammies in the worst possible way. Louise even gets a little (much deserved) comeuppance at the end.

Remove the tiny clip of trick-or-treating, take the kids out of their costumes, and give them another reason to end up at the mausoleum and this could be any other episode.

Yup, a paranormal investigation and Tina dating a ghost are things that could happen any random Wednesday at Bob’s. 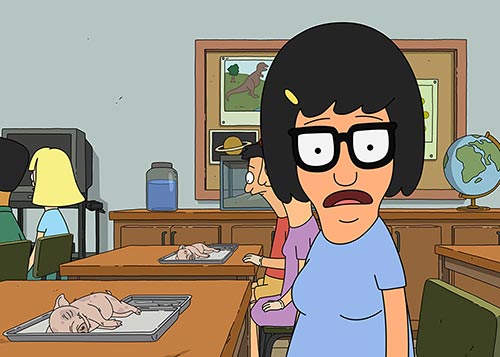 The Synopsis: Tina makes fun of the wrong fetal pig in biology class, and it haunts her dreams.

Meanwhile, Bob has some serious earwax, and it sort of… maybe… turns Linda on?

The Verdict: This episode gets the least love of all the Bob Burgers’ Halloween episodes (or seems to), and I’m not sure it deserves all the nose-thumbing. There’s some really good stuff in here.

Being haunted by one’s own conscience? That is some deep, horrifying psychological trauma for a cartoon.

Then, Tina summons her siblings even in her dream to help her get rid of the ghostly pig? That’s super sweet familial bonding. The fact that Gene and Louise realize they can be anything they want to be in said dream is just icing.

The B story is where this episode falters. Not because it isn’t funny. It is. Especially, the climax, which is… well… disgusting, and so, so Bob’s Burgers.

It just isn’t particularly Halloween-y, and I’m spoiled and like my Bob’s Halloween episodes ultra-Halloweeny. 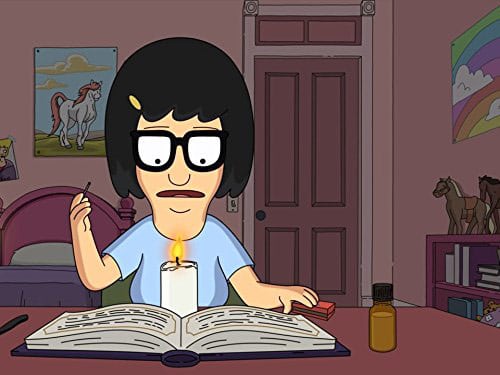 The Synopsis: Tina’s got a genius idea for a costume to win the school’s Halloween costume contest. Tammy steals it, forcing Tina to go all goth witch (and sand-witch), while also getting herself cursed by the crossing guard.

Meanwhile, Bob’s pretty spectacular jack-o-lanterns keep getting stolen from in front of the restaurant.

The Verdict: Stellar. Even with so much Tammy.

Tina going dark plays especially well, because she is, by far, the sweetest of the Belchers, and it’s good to see her sporting a little backbone, especially with Jimmy Jr. (that turd).

The curse of the crossing guard gives this ep a spooky-ish edge, and the jack-o-lantern B story also works as a legitimate mystery.

Just who is stealing Bob’s jack-o-lanterns? Is it a hoodlum? A ghost? It’s exactly as ridiculous as you would expect from Bob’s Burgers.

The Synopsis: The Belcher kids and friends stop by their alley fort on the way to trick-or-treat and get trapped inside it by a truck, as Louise’s freaky wannabe-frenemy Millie torments them.

The Verdict: Halloween through and through, complete with a perilous situation and a truly creepy antagonist.

There are thrills. There are chills.

There’s Bob and Linda going trick-or-treating in the kids’ costume and a close encounter with death.

Then, there’s payback. In fact, I might argue this episode has the best ending of any of the Halloween episodes, despite being number five on the list. 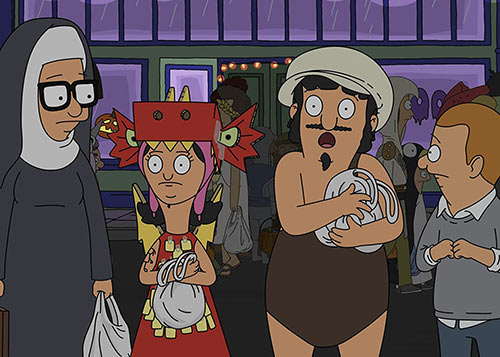 The Synopsis: It’s trick-or-treat night, and someone is snatching kids’ candy bags on Ocean Avenue.

Meanwhile, Teddy gets into a decorating war with the handyman next door.

The Verdict: The kids are trick-or-treating, and Bob and Teddy are scaring up the joint, so it has all those good, all-in Halloween vibes.

The mystery of the candy is adequately mysterious, there’s a haunted house subplot, and Bob dresses up (by choice!).

Part of the joy of Bob’s Burgers Halloween episodes each season is seeing what those crazy Belcher kids have come up with for costumes, and this episode takes it one step further, pairing Tina’s costume with an ending credit song that really brings this mother home.

Plot-wise, the episode could easily come in at number five. Maybe even number six. It literally gets the boost for the credit sequence. 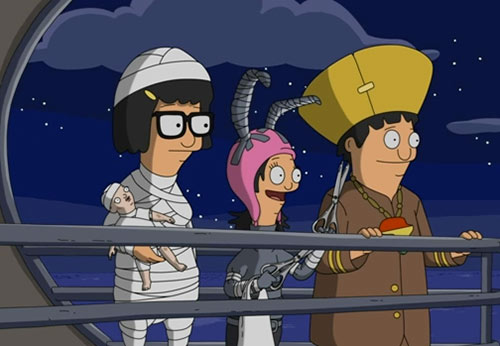 The Synopsis: The kids want to trick-or-treat alone for the first time. With no adults to bog them down, they hop the ferry to King’s Head Island, where rich people do Halloween right and hand out full bars.

It’s also where the bullies come out at night for Hell Hunt.

The Verdict: Any episode where the Belcher kids do the right thing is always going to score pretty high in my book. Even if they take some convincing and can’t quit while they’re ahead. Talking to you, Louise.

There’s a nice “the grass is always greener until you started getting pelted with pee-filled water balloons” moral, and everything about Teddy’s murder-mystery party is on-point.

“You have a cotton ball.” 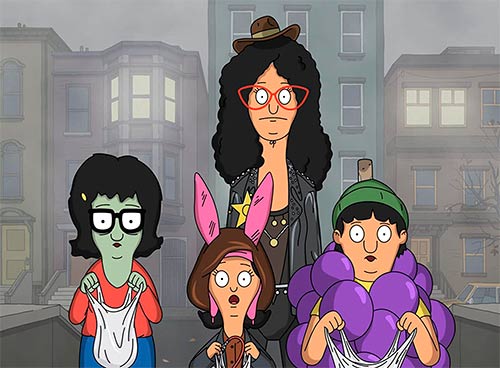 The Synopsis: It’s Halloween, and there’s a wolf terrorizing the town. Linda takes the kids trick-or-treating, but it’s a total bust, so they go hunting for the Wonder Wolf instead.

Meanwhile, Bob is injured, Teddy comes to look after him, and a series of coincidences, plus being hopped on pain killers, convinces Bob Teddy is the Wonder Wolf.

The Verdict: Bob losing his shit is always a glorious site to see, and this may be his most extreme shit-loss of the entire series. Seriously, dude goes crazy, and Bob is funny when he’s crazy.

Also, Teddy shows up to look after Bob dressed as a sexy nurse. He meant to order “scary nurse” but he clicked “sexy nurse” – “Sometimes the universe decides, you know?” – and how in the hell do you beat that hideous sight gag?

With the number one episode on this list, that’s how. 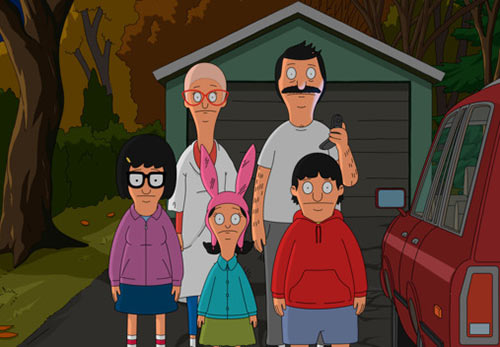 The Synopsis: Nine-year-old Louise Belcher has never been scared. She’s pretty bummed about the fact.

So, what are two loving parents to do, but create a very scary haunted house that’s the usual batch of peeled grapes and bad costumes and not really scary at all?

When their haunted house fails to scare and the Belchers try to pack it in and go back home, their car has a flat tire, turning Louise’s night of fake scares into a night of true horror for the entire family.

The Verdict: The one that scares Louise is the scariest of them all.

It’s also the funniest and the most heartfelt of all the Bob’s Burgers Halloween offerings.

Even the credit sequence shows the Belchers having a grand old time together, reminding us that something can be truly funny, truly freaky, and truly heart-warming at the same time.

“Dad… I feel like you’re doing a really good job as a dad. I’m having a good childhood. Not right now. But overall.”

Any cookies that may not be particularly necessary for the website to function and is used specifically to collect user personal data via analytics, ads, other embedded contents are termed as non-necessary cookies. It is mandatory to procure user consent prior to running these cookies on your website.