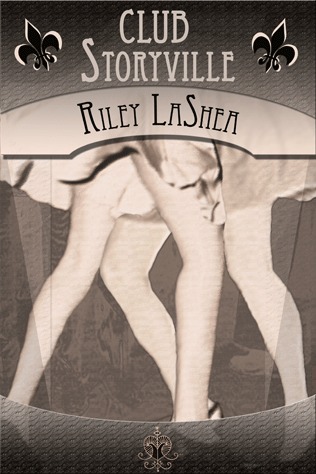 I recently came to the conclusion that we must be living through a golden age of lesbian literature, and it’s books like Riley LaShea’s Club Storyville that convince me this is the case. It’s a novel which tackles issues of sexuality and race head on, and which claims the reader’s attention from beginning to end. Above all, it’s a beautifully exercised and compassionate narration of the sacrifices people are prepared to make in order to live and love freely.

Before reading any further, know that the review below contains some minor spoilers.

I knew that I was in for long haul when … from the opening pages. There is something about Riley LaShea’s style of writing which is both compelling and absorbing. I felt immediately drawn into 1940s America, and in particular to a south traumatised by the effects of the war, divided along racial lines by Jim Crow legislation, a society desperate to maintain appearances while tensions brew beneath its surface. Above all, I absolutely loved the way LaShea skillfully meshes her tale of forbidden love between two young women into this complex, historical background.

Winter wore relentlessly on, and nothing changed for the better. Scott was training to fight a war that felt like it would never end, Nan was growing sicker, Ariel went back to the distance she liked to keep, friendly, but not overly affectionate, and the chores were the same, day after day, week after week.

There was life happening all around me, but no one was living. It felt as if we were all just biding our time, and for what, I wondered. Until Scott shipped off to war? Until Nan died? Until the war ended and ‘all right’ changed again? In those days, it felt as if hope was something that belonged in storybooks, not in the real world.

I had read tales of the Roaring 20s, but it was hard to believe I had been around during those years of plenty. Just shy of seven when the stock market crashed, the only life I could remember had been careful spending and rations. I had grown accustomed to the fact we would always have more than most people, but never excess, that there would always be enough, but never more, and that was exactly how life felt. Everyone just existed, no one thrived. We got by on what we had, and stopped dreaming about what we wanted.

My existence was dishes, and laundry, reading into the nights, helping Mama tend the house, and going to visit Nan’s room, which was the closest I came to escape from monotony. I stopped thinking I might go to college one day when the war was over, that I would get my own apartment in the city and build my own life.

I didn’t think I would ever do more than what I was doing, I didn’t think things were ever going to change, and I didn’t think I was special to anyone, especially not to Ariel. She was so much more than me, this classy, educated, capable creature who could survive North or South on her own, while I was just terrified of losing anyone else, despite the fact I still had Nan and Mama and Daddy right there with me.

One night in February, though, it was Ariel’s voice that pulled me from deep inside a bad dream. Waking breathlessly in my bedroom, I thought she was part of my sleeping mind, because I had dreamt of Ariel before. In those dreams, we were real friends who touched and laughed together where everyone could see us.

“Ariel?” I said in confusion when I spotted the mirage of the person moving about my room.

“Shhh,” she glanced back at me as she went through my things without asking. “Don’t wake everyone up. I want to show you something. Where are your warm clothes? It’s cold.”

“Where are we going?” I asked a few minutes later, after I had pulled my clothes over my nightgown and Ariel was leading me away from the house by flashlight.

“Just up here,” she replied, and I could barely see her smile in the light that cast upward toward her face. “Okay,” she came at last to a stop, clicking the flashlight off, and, the moon only a sliver above us, it was as dark of a night as night ever got. “Look up.”

Despite her specific instruction, I looked to Ariel first, but I couldn’t see her standing right beside me, so I did as she told me, glancing to the sky to find the same stars that were always there. Wondrous as always, they were no more wondrous, and nothing that wouldn’t be there the next night at nine o’clock, instead of at three o’clock in the morning.

Remembering Ariel had been living downtown, though, and in Boston and Chicago and other big cities before that, it occurred to me the stars over a country sky might be a remarkable thing for her, so I squinted hard, trying to see what she saw that put such excitement in her voice.

It was then that the first light streaked across the sky.

“What was…?” Before I could finish asking, another light streaked overhead, and another, until there was nothing but a blitz of stars, hundreds of wishes waiting to be made to change the course of the world.

“Nan said you used to love to look at the sky,” Ariel whispered as one final light dashed over our heads, leaving a trail to slowly fade away, and, dropping my gaze, I looked for her again in the dark night.

“It’s a meteor shower,” Ariel answered the question I never got around to asking. “It’s a really good one.”

More remarkable than what I had seen, though, was how it felt, knowing Ariel had discovered something I hadn’t told her and had woken me in the middle of the night to show me something I would have otherwise missed.

“You and Nan talk about me?” I questioned, and, for a moment, with no other soul around and winter’s cold holding nature in its quiet clutches, there was the deepest silence I had ever known.

“She talks about all of you,” Ariel returned at last, and it sounded careful, as if she didn’t know how much she should say. “You’re important to her.”

Though it wasn’t the answer I was hoping to hear, I didn’t know what answer I wanted enough to tell the difference, so I decided, for the moment, it was sufficient in meeting my curiosity.

“Is it over?” I asked, eyes going to the sky in search of more of the spectacle when I could still see nothing closer to the ground.

“No,” Ariel responded. “There will be a few more before sunrise. That had to have been the best of it, though. We got lucky.”

I felt lucky. For a moment, with her, I felt like I wasn’t just waiting for the chores to need doing or for the next bad news. It felt like there was life on the ground beneath that endless, mysterious sky, and Ariel and I were living it together.

“Can we stay a while longer?” I questioned, not expecting to see anything better than what we had already seen, but wanting that magical moment, when it felt like I was important to Ariel, to last.

“Yes,” she answered simply, and I could hear the fumbling of the flashlight as she slid it into the pocket of her coat and the brush of fabric against fabric as she crossed her arms against the chill.

“Do you know what I think?” Ariel’s voice came softly out of the night, like a trick of the wind, some moments later.

“What?” I was dying to know what she thought. I had been dying to know for weeks what went on inside Ariel’s head. I was so tired of not knowing.

“I think one day people will reach the stars.” She stated it plainly, as if she wasn’t saying something utterly absurd.

“Do you really?” I questioned.

“They’ve already had rockets reach up there,” she said. “Eventually, it will be people.”

“Do you think anyone will waste money on that?” I couldn’t help but question. It seemed so far-fetched to me that such a thing would ever come to pass when there were financial markets in ruin and a war destroying cities across the ocean. “What would be the use? Wouldn’t it be silly?”

“I don’t think so,” Ariel returned softly. “When this war ends, there will be something else that comes. If the years go on like this, they will be so long and so exhausting, everyone will give up. Humanity can’t go on like that forever. Without hope, Elizabeth…” I could hear the change in Ariel’s voice as she looked toward me, and I wondered if she could see me any better than I could see her. “…we die.”

In that instant, I realized Ariel had been paying attention to me, maybe more attention than anyone else. Tears pressing against my eyes, I reached out for her, like I had wanted to every day for weeks, my hand finding the crook of her arm. Warmer as I pressed against her side, I let her think my eyes were still on the sky as I tried to make out her face in the darkness, far more in awe of Ariel than of the universe.

What surprised me about this book … the fact that much of it takes the form of a journey – both literal and emotional – for the main character Elizabeth. I assumed that her burgeoning relationship with her grandmother’s nurse, Ariel, would develop through chance meetings and whispered conversations. Instead, Elizabeth and Ariel  find themselves flung together on a journey to New Orleans, in order to fulfill her grandmother’s final request. This theme of travelling works beautifully – it really racks up the tension as Elizabeth finds herself in potentially intimate situations with Ariel, yet uncertain as to whether or not she can reveal her passion. It also forces her to open her eyes to the true nature of racial oppression, forcing her to mature very quickly, to shed her innocence, and to come to terms with her sexuality.

My favorite character … was probably Nan – Elizabeth’s grandmother. She’s a very old lady with a very wild past, with secrets of her own – a woman who knows her own mind and who refuses to compromise for the sake of appearances. She has a wicked sense of humour, abundant reserves of courage, and she delights in provoking Elizabeth’s prim and proper parents. In spite of her age and apparent frailty, Nan is larger than life, a character who emerges as the catalyst for the events in the novel.

Club Storyville is quite simply a wonderful novel which works on so many levels – as a tale of self-discovery, as a skilfully-realised piece of historical fiction, and as a romantic love story. It’s a book which forces you to think about just how much people were prepared to risk in order to be with the person they love. In that respect, I’d say it’s a very important book, and I highly recommend it.