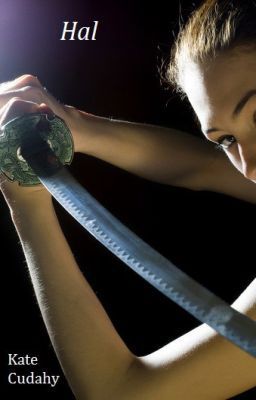 I originally read this book when it was submitted to one of our sister sites and I absolutely loved it. In fact, I had been looking for good fantasy novels with LGBT main characters and was thrilled when I learned of Hal.

One of the things that I loved so much about reading this book is that it is a fantasy novel first instead of a LGBT book. It just happens to have a pretty great lesbian romance plot point thrown in amongst the duels and royal scandals.

Before reading any further, know that the review below contains some minor spoilers.

I knew that I was in for long haul when … the book started with not only a strong female character, but also a lovable brute of a character in Beric. I also enjoy that there wasn’t an intense focus on Hal being gay, which happens in a lot of LGBT books. Instead, she’s just a duellist who happens to be into chicks.

“I can see you don’t need any more training,” he’d  yelled, “when you’re prepared to throw away a duel for the sake of looking like a damned acrobat!”

Although she would never have admitted it, the reprimand had remained with her during this fight, As the Easterner had swung, blocked and parried she focussed upon his weaknesses, using his own strength against him to bring him down. Not such spectacular fighting, but certainly more effective. The last thing she wanted was another armful of Beric’s crooked stitching.

Doors on the far side of the arena opened onto public baths, the women’s divided from the men’s by a thin partition wall. Pulling off her boots, Hal gasped as her feet encountered the cool chill of marble. The sound of  water lapping at the walls of the pool seemed to have a calming effect on nerves still frayed after the duel. A small group of women bathed and gossiped, releasing occasional cascades of laughter around the stone chamber.  Recognising one or two of them from the palace, Hal decided against joining them. Few courtiers ever acknowledged her with more than a stiff, cold nod.

Hal stripped, leaving her clothes in a pile, and lowered her body into the water, aware of the sly glances the women threw her, their curiosity overcoming disdain. She slid from sight beneath the surface, only too aware of strange figure she must cut: boyish grace combined with an athletic physique, intense blue eyes contrasting with a pale, almost white complexion. City-dwellers saw little of the sun. With a gasp, she rose again to stand at waist height in the water, raking wet fingers through cropped, coal-black hair. Finally, allowing herself to sink lower, she leant her head against the pool’s edge, sensing the sweat and vigour of the fight drain out into the water. The women lost interest and resumed their chatting, leaving Hal alone to debate with herself whether she had strength enough for the Senator’s celebration.

What surprised me about this book … was that it focused on being a good fantasy novel first and foremost. In my reading experience, a lot of the books with LGBT characters have a primary focus of being gay such as the struggles of coming out. So finding a fantasy book with characters who just happen to be gay was quite refreshing. There was even a really surprising duel that involved Hal and an ex-lover.

My favorite character … was Beric, who was sort of a lovable brute of a guy. He is part father-figure and part mentor to Hal, often funny but always looking out for her best interests. Of course, he is just one of the many likable supporting characters surrounding Hal.

At the end of the day, I think that this is one of the best lesfic books that I’ve read this year. It seems like there is no shortage of really terrible options in the lesbian romance genre, so finding something a bit outside of that was awesome. And for it to be such a good book was an even better find.

Knowing that this is part of a series (book two is already available) makes an awesome reading choice. You can pick up this book on Amazon .

It used to be that getting famous was pure luck for a tiny fraction of the population. Now with social media, it is surreal how the most average of people can become an overnight sensation. Here are just a few. Chewbacca Mom What began as a shopping trip for yoga pants became an excuse to…